In a tense standoff that could erupt at any moment into more bloodletting—with her ex-husband on the threshold of death—Sara must search for answers and an escape in the memories of a time at the start of their relationship when another brutal, shocking crime shattered their small-town world.

Because the sins of the past have caught up with Sara and Jeffrey … with a vengeance.

Indelible is somewhat of a departure from the previous books in the Grant County series but it is a welcome change as Slaughter delves deeper into Jeffrey’s background. Sara and Jeffrey’s relationship is a complicated one as they divorced prior to the first novel as Jeffrey had been unfaithful, however neither have been able to completely let go. Over the course of the previous three novels, the couple have started dating again, although it hasn’t exactly been smooth sailing. At the start of Indelible, Sara reveals Jeffrey wishes them to marry again but her reluctance has driven a wedge between them.

The events related in the past go a long way to explaining who Jeffrey is as a man and why he does a lot of the things he does. The son of an alcoholic mother and an abusive jailbird father, Jeffrey has remarkably been able to make something of his life but part of him still doesn’t really believe he deserves the things he has achieved and is waiting for the other shoe to drop. The people in Jeffrey’s hometown seem to have a very low opinion of him and are quick to lay the blame for almost everything at his feet. However, Jeffrey and his friends do have a dark secret, long buried, which is about to be blown wide open and will jeopardise their futures.

While the story in the past seems unconnected to what is going on with the hostage situation, it eventually becomes apparent they are connected as Slaughter skilfully weaves both plots together. I think this is also the book where I fell completely in love with Jeffrey because he’s overcome so much to become the good man he is today, even though he isn’t perfect and still makes stupid mistakes.

Karin Slaughter is one of the world’s most popular and acclaimed storytellers. Published in 120 countries with more than 35 million copies sold across the globe, her 21 novels include the Grant County and Will Trent books, as well as the Edgar-nominated COP TOWN and the instant NYT bestselling stand-alone novels PRETTY GIRLS, THE GOOD DAUGHTER, and PIECES OF HER.

The Last Widow by Karin Slaughter

Pieces of Her by Karin Slaughter 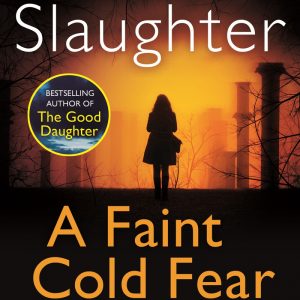